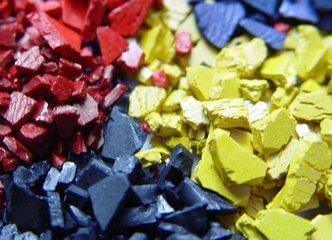 1, nitrocellulose (NC) color film
Nitrocellulose (nitrocellulose), light white or light yellow floc, insoluble in water, soluble in organic solvents, ketones, esters, alcohol ethers, nitrogen content is generally 11% to 13%. According to the high and low nitrogen content, the screen printing ink is divided into L type and H type by nitrocellulose, and the nitrogen content ranges from 10.7% to 11.4% and 11.5% to 12.2%, respectively.
The nitrocellulose series color film is made of high quality organic pigment, and the nitrocellulose is used as the carrier resin to pre-disperse the pigment in the carrier resin, and the carrier resin is used to coat the pigment. Used in the manufacture of printing inks, wood, cosmetics, leather products; NC series of color films have been successfully applied in gravure flexo printing inks in the packaging field, especially cigarette inks.
The pigment content of NC series color film is 60%~65%, which enables the ink formulator to directly load into the ink formula or to produce the color paste with maximum flexibility, and then make the ink by adding the color paste to the varnish. . The NC series of colorants are easily dispersed on a high speed disperser, giving high color density and gloss.
2. Waterborne acrylic (AC) color film
The water-based acrylic color film is a product which is made of a high-quality organic pigment and a pre-dispersed pigment in a carrier resin using a high-grade water-based acrylic resin as a carrier. This series of colorants is used in water-based printing inks and has been used in water-based inks for paper flexographic printing, such as preparation, food and beverage packaging.
The water-based acrylic color film has a pigment content of 65% without adding any additives, so that the AC water-based color film can give the ink formulation maximum flexibility in application, directly into the ink formulation or first into a color paste, and then a color paste. The ink is added in the form of a varnish to form an ink, and a suitable aqueous resin is used to produce the desired ink. The water-based acrylic color film is easily dispersed on a high-speed disperser, giving a high color density and gloss, and is convenient for transportation and long storage time.
3, chloroacetic resin (VC) color film
Chloroacetate resin is a copolymer of about 86% vinyl chloride and 14% vinyl acetate, mainly used as a binder for inks and adhesives. Due to the solubility of the chloroacetic resin and the excellent fluidity of the formulated color paste, the formulated ink and coating have excellent toughness, flex resistance, excellent tear resistance and excellent adhesion. Chloroacetate resin is compatible with all series of chloroacetic acid products, and has good compatibility with other copolymers, polyvinyl chloride and acrylic resins, as well as phenolic resins and alkyd resins.
The chloroacetic resin VC color film has a pigment content of 60% to 65%, and can be directly loaded into the ink formulation or added to the varnish in the form of a varnish without any additives. Mainly used in screen printing inks and gold and silver cardboard printing inks.
4, polyvinyl butyral (PVB) color film
The polyvinyl butyral color film is a product in which a pigment is pre-dispersed in a polyvinyl butyral carrier resin, and the pigment is coated with a carrier resin. The content of the pigment in the polyvinyl butyral color film is 50% to 60%, and is directly loaded into the formulation or firstly produced into a color paste to form a finished ink. Easy to disperse in high speed dispersers, giving high color density, gloss and transparency. It is used in printing inks, print cartridges, colored markers and other materials in various packaging fields.